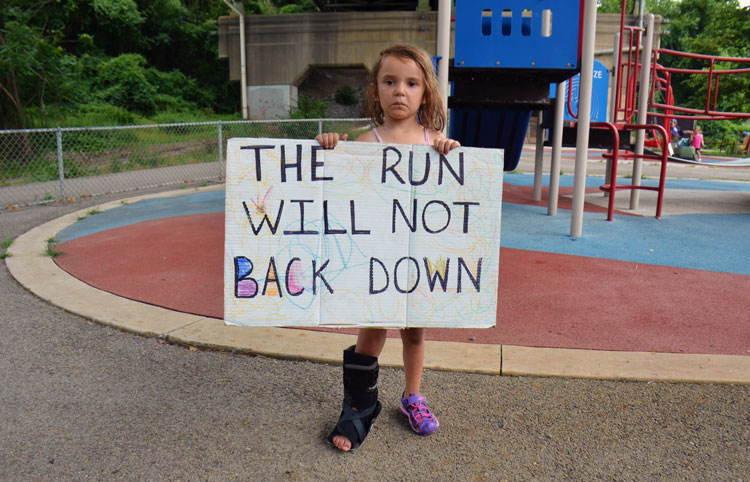 Watch this video to discover a hidden Pittsburgh gem, The Run—and learn about two serious threats it faces. Our neighborhood needs flood relief, not a new roadway running through it and the neighboring public park. 8-10 million roadway dollars are better spent on infrastructure needs left unaddressed for decades in Pittsburgh neighborhoods. Read the alternative plan and sign the petition!

We are writing to make you aware of an issue affecting our communities of Four Mile Run (The Run) and Panther Hollow, which border each end of the Junction Hollow portion of Pittsburgh’s Schenley Park. All are in danger of being erased by corrupt development practices of city government and its private partners.

In 2015, Mayor Peduto’s office and the Urban Redevelopment Authority (URA) announced a plan to build a publicly financed, privately controlled roadway through both neighborhoods and Schenley Park. This plan, then called the Oakland Transit Connector, is now known as the Mon-Oakland Connector or the Mon-Oakland Mobility Project. We were never consulted about the plan before it was announced—a violation of Pennsylvania’s Sunshine Act.

We learned of the Mon-Oakland Connector from an article in the Pittsburgh Post-Gazette that reported, “The URA this month approved a $3 million application for a state grant to help pay for the first phase of the project…” The grant application, filed with the Pennsylvania Department of Community and Economic Development (Single Application ID: 201507311048; Web Application ID: 8068967), contained numerous falsehoods as detailed in a letter from a concerned Panther Hollow resident. A section of the grant application states:

The act of knowingly making a false statement or overvaluing a security to obtain a grant and/or loan from the Commonwealth of Pennsylvania may be subject to criminal prosecution.

After residents filed Right-to-Know (RTK) requests with the URA, the URA turned over their grant application but with several missing pages. Our neighbor had already received the full grant application from Harrisburg. Details about material redacted from the grant application can be found at www.opnnews.org/2016/03/ura-files-suspect-development-grant-without-consulting-residents.

For more than four years now city officials, consultants, and private partners have misled and outright lied to residents, the public, and the press regarding the Mon-Oakland Connector. Through additional RTK requests, we have obtained proof of their deceit.

We want to know where you stand on this issue. The District Attorney of Allegheny County has a duty to investigate corruption on the part of public officials. If you win the office in our upcoming election, will you investigate the PA Sunshine Act violation, the fraudulent grant application that was unlawfully redacted in response to a RTK request, and other evidence of corruption?

We look forward to your prompt response. It will determine whether we and our supporters cast our votes for you on November 5th.