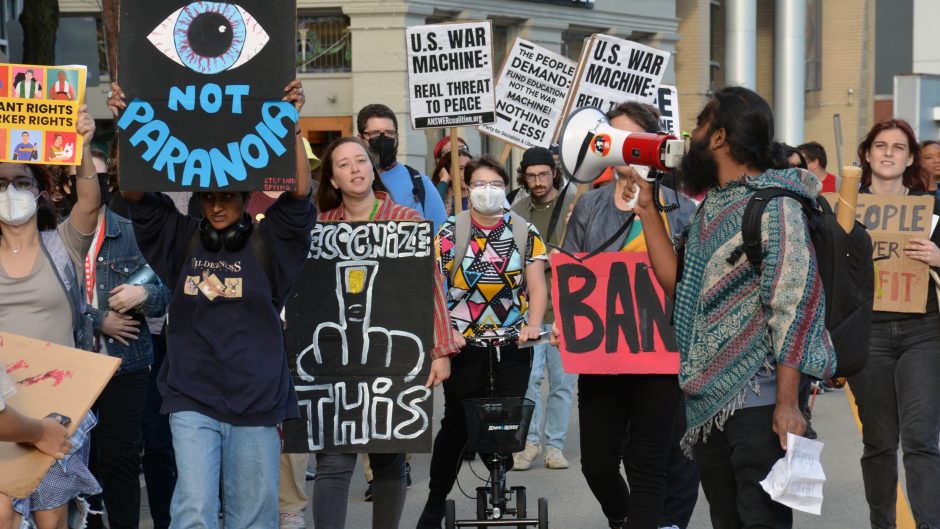 On September 26, Against Carceral Tech held a “Tour of Harm” that wound through the campuses of Carnegie Mellon University and the University of Pittsburgh. About 60 people carried signs and chanted, stopping at sites with ties to research that aids development of technology used for policing and military applications.

ACT organized the march to raise awareness of the relationship between local academic institutions and state violence. Speakers called on the City of Pittsburgh and CMU to ban the use of facial recognition. Some shared their experiences of the universities mistreating students in tech fields.

This technology has the potential to harm communities near Hazelwood Green, where both CMU and Pitt have a growing presence.

Facial recognition is a “perpetual lineup”

In July, CMU drafted a policy that would have allowed the university to use facial recognition during criminal investigations. Civil liberties advocates and researchers have warned that this technology threatens privacy and contributes to mass incarceration.

For example, as Brandi Fisher of Alliance for Police Accountability (APA) shared during her speech: “17 people died in the past 18 months—not years—in Allegheny County Jail.”

The danger does not affect communities equally. According to “Reimagining Public Safety in Pittsburgh and Allegheny County,” a report released by APA, “67% of people currently incarcerated in the Allegheny County Jail are Black despite Black people only making up 13% of the county’s population.”

“We are supposedly a welcoming city, but this technology is not welcoming,” said Laura Perkins of Casa San Jose, an organization that works with the immigrant community. “Facial recognition has much higher levels of inaccuracy with people with darker skin—that is a fact. In Pennsylvania, many immigrants don’t have access to driver’s licenses. When they are targeted by the software, they won’t be able to even prove their identity.”

CMU quickly shelved its facial recognition policy after community pushback. In 2020, Pittsburgh City Council passed legislation that requires city council approval of such technologies before the city acquires or uses them, except in “an emergency situation.” The legislation does not cover JNET, a system with facial recognition capabilities that any Pennsylvania law enforcement agency can use.

Another form of surveillance technology, predictive policing, has a hyperlocal connection. In 2015, CMU’s Metro21 initiative received a $600,000 grant from The Richard King Mellon Foundation, one of Hazelwood Green’s owners. According to the foundation’s annual report that year, the grant funded two Metro21 projects, one of which covered two years of support for a predictive policing model based on CrimeScan. A pilot program using data to identify people at risk of committing or being victimized by crime was ultimately scrapped in Chicago.

Rather than targeting individuals, Pittsburgh’s system uses algorithms to target locations based on large amounts of data that predict high-crime areas. CrimeScan relies on a “broken windows” approach, which holds that small crimes like disorderly conduct or damaging property encourage more serious crimes.

Proponents of the technology, including the city’s former police chief Cameron McLay, say it improves quality of life and removes human biases from the equation. But critics argue it can actually reinforce the biases of its creators. And they point to a lack of accountability for harmful decisions that can be blamed on a computer.

CMU researchers developed Pittsburgh’s CrimeScan program in partnership with Police Chief McLay. In August 2016, they quietly began a pilot in Homewood, then expanded it citywide in May 2017.

If that process does not sound transparent to the public, it wasn’t meant to be. A Memorandum of Understanding between the City of Pittsburgh and CMU (the first such agreement between a city and a university) allowed them to bypass city procurement processes for joint projects. In a 2018 interview, then-Mayor Bill Peduto boasted, “I don’t have to put out an RFP. I can just pick up the phone, call the university, and say, ‘I need your team to develop this for me.’”

State violence begins at home—and it doesn’t end there

In other parts of the world, governments and corporations are moving full steam ahead with surveillance technology. This has human rights watchers and some of the corporations’ own employees sounding an alarm.

Ian Hoppes of No Tech for Apartheid spoke about Project Nimbus, a $1.2 billion contract secured by Google and Amazon to provide cloud services to the Israeli government and military. Mr. Hoppes said Project Nimbus allows more surveillance of Palestinians and expansion of Israeli settlements on Palestinian land. Both Google and Amazon have sought contracts with the US. Department of Defense, Immigration and Customs Enforcement, and state and local police departments.

“This technology and other forms of oppression will likely come home to roost in the U.S.,” Mr. Hoppes said. But employees and students at affiliated universities fear speaking out because they face retaliation from their institutions.

Pat Healy, an information science PhD student at Pitt, said it wasn’t obvious to him when he first started out, but his work “could be purposed for military applications.”

Franky Spektor, a CMU graduate student, told the crowd, “CMU is so deeply entrenched in bureaucracy we barely have a voice as it is, so we need to speak up and be loud, and make sure they hear us, before the city and CMU use this technology even more and take away our voices and our rights.”

Ms. Spektor said she knows of students who, while working many hours in their fields, also sell their plasma just to cover their basic needs. Their financial dependence makes it especially hard to challenge questionable university projects or policies and risk losing funding.

Bonnie Fan, a CMU graduate and Against Carceral Tech organizer, emphasized the importance of solidarity to protect both students and broader communities.

A condensed version of this article originally appeared in The Homepage.