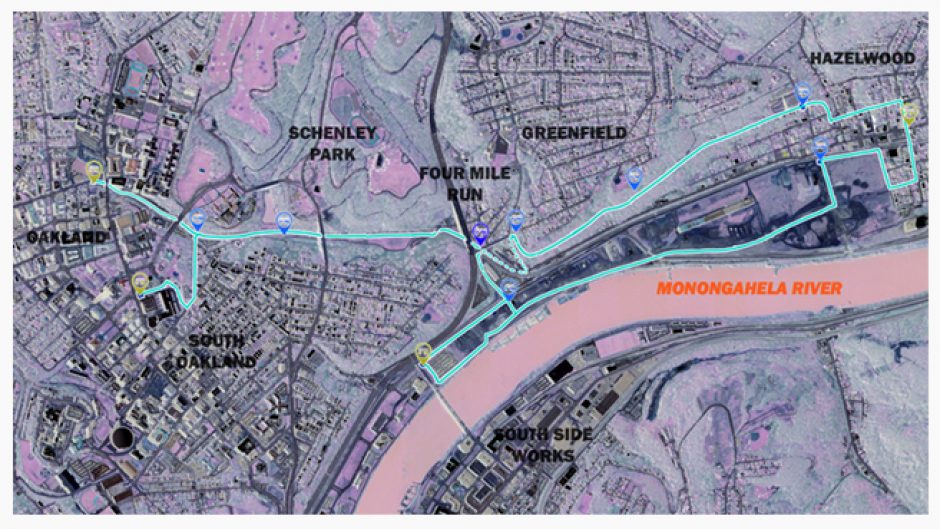 The adjoining communities of Hazelwood and The Run share more than a ZIP code: They are the two neighborhoods most directly affected by the Hazelwood Green development and its most controversial feature, the proposed Mon-Oakland Connector (MOC) shuttle road through Schenley Park.

Hazelwood Green owner Almono Partners commissioned the road, funded with $23 million of Pittsburgh’s capital budget, primarily to link its development to university campuses in Oakland—but says its shuttles will improve mobility for Hazelwood residents. (Almono Partners has voiced no interest in improving anything for Run residents, except perhaps their odds of moving away.)

Getting in and out of Hazelwood can be a major problem, partly because the three streets that serve as entrance/exit points suffer from decades of neglect. The stretch of Irvine Street between Greenfield Avenue and Hazelwood Avenue is a prime example. It contains just about every dangerous condition imaginable for pedestrians, cyclists, and even motorists. A fatal car crash in January 2019 involved frozen seepage from the hill above the east side of the road. This same water helps create year-round hazards on City-owned sidewalks that have disintegrated beside speeding traffic. Vehicles often block other sections of the sidewalk, forcing travelers into the road.

Only the bravest/most desperate walkers and bikers consider Irvine Street an option—and for people using wheelchairs or pushing strollers, it’s not an option at all. Nor is the long way around through Hazelwood Green accessible to them because it involves navigating steps or crossing Second Avenue.

Irvine Street offers the most direct connection between Hazelwood and The Run. The one-mile distance would be easy to cross if not for the serious risks involved. Residents of Hazelwood could safely access Schenley Park without a car. And Run residents would find it much simpler to reach their nearest post office, library, and shops in Hazelwood.

Fixing this dangerous stretch of sidewalk has been identified as a priority by everyone involved. The Greater Hazelwood Neighborhood Plan lists sidewalk construction and improvements as a key strategy to give residents and visitors access to Hazelwood. Our Money. Our Solutions., a community-driven alternative to the MOC, calls for an “Irvine/Second Avenue sidewalk audit and replacement/install to ensure ADA-compliant width and curb cuts, from Greenfield Ave. through the Hazelwood business district.”

Pittsburgh’s Department of Mobility and Infrastructure (DOMI), which is responsible for building the MOC, listed “2nd Avenue sidewalk” as a component of the MOC project in a January 2020 memo to City Council. DOMI committed $700,000 to the sidewalk (to be matched by a potential grant from the state of Pennsylvania). The memo marked the first time DOMI publicly identified certain components (including the sidewalk) as part of the project and broke down costs.

However, in DOMI’s latest budget presented at their October public meetings concerning the MOC, the sidewalk funding has disappeared. It’s unclear whether DOMI will receive the state grant they say they applied for.

Compare the ill-defined, will-o’-the-wisp accounting of the Irvine Street sidewalk funding to the single-minded focus with which the MOC has been pushed over the past five years. Even in the midst of a pandemic that has left Pittsburgh with a $100+ million budget shortfall, the MOC is the city’s single largest transportation corridor investment.

Some say budgets are moral documents. At the very least, Pittsburgh’s budget represents a statement of its priorities. Building a road through a public park for private shuttles in no way reflects the priorities of Pittsburghers, who are being asked to fund this project.

Irvine Street/Second Avenue is only one glaring example of community needs unmet in favor of funding the MOC. As members of these communities, we still have a chance to come together and advocate for the money to go toward improvements we’ve been requesting for years.

It’s high time for City Controller Michael Lamb to audit the $14.5 million already budgeted to the MOC in 2018 and 2019. Please join us in encouraging him to do so by calling 412-255-2054 or emailing City_Controller@pittsburghpa.gov.

Furthermore, City Council must demand a line-item listing of the additional $4.15 million requested for 2021 to make sure these funds are directed first to fixing existing infrastructure—rather than creating new infrastructure of questionable value to existing communities. Our public money should prioritize solutions to our problems, not developers’ wishes.

This January 7 memorandum from Department of Mobility and Infrastructure (DOMI) director Karina Ricks to Pittsburgh City Council shows a sea change in the battle for (as the memo puts it) “COMMUNITY GENERATED TRANSPORTATION SOLUTIONS.”

For the first time, DOMI has named specific components of the Mon-Oakland Connector project and attached dollar amounts to some of those components. Whether or not the information proves trustworthy, Pittsburghers can count its emergence as a win for accountability. Previously, DOMI refused to provide these details even in public meetings. Such details existed in a nebulous “magic bag” that constantly morphed, defying scrutiny.

The memo shows DOMI responding to our call for public infrastructure improvements listed in the Our Money, Our Solutions plan. Reluctantly—and perhaps dishonestly—but directly, and point by point. Thanks, DOMI!

Stay tuned as the fact-checkers get to work. If you want to contribute data or effort, please leave a comment on this post or email us.