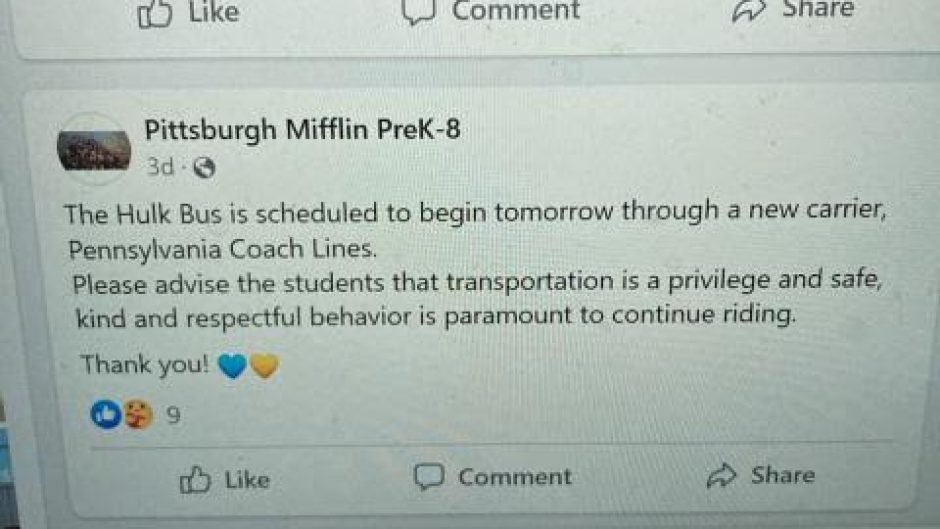 The 2022-2023 school year has brought transportation and safety challenges to Hazelwood students. Their families, along with community organizations, are stepping in to fill the gaps created by canceled bus routes and unsafe streets.

Filling in for a school bus

In late October, Pittsburgh Public Schools informed the families of about 40 students who are bused from Hazelwood to Pittsburgh Mifflin Pre K-8 that the route was canceled until further notice. The district blamed the national bus driver shortage for cancellation.

Amber Adkins, whose child rides the bus, told Channel 11/WPXI in an October 31 interview that service had become unreliable over the previous month.

The school district offered mileage reimbursement and bus tickets for Pittsburgh Regional Transit. But these didn’t help caregivers without their own vehicle or children too young to ride public transit alone.

“The most important part of Hazelwood is our children,” said POORLAW co-founder and CEO Saundra Cole McKamey during a November 7 phone call. She said the lack of transportation was “causing additional financial hardship and creating a burden for families.”

On November 9, Mifflin posted on its Facebook page that the bus route would resume the next day through a new carrier.

“Please advise the students that transportation is a privilege and safe, kind and respectful behavior is paramount to continue riding,” the post continued.

James Cole, who runs the Hazelwood Cobras youth football program, said during a November 11 call that parents told him it seemed like “they’re saying if kids don’t act right on the bus, they will discontinue the route again.”

Mr. Cole said the problem of unruly students is not unique to Hazelwood, and there are other ways to deal with it, such as hiring bus monitors from the community.

Ms. Cole McKamey noted that Hazelwood has no public non-charter school within walking distance because of the school district’s past decisions.

“It seems so disrespectful to me,” Ms. Cole McKamey said. “They closed our community school [Burgwin Elementary] to make all those kids go to Mifflin and get their enrollment numbers up.”

Burgwin shuttered in 2006. Pittsburgh Public Schools sold the building in 2014 to reopen as a Propel charter. Although students at Propel Hazelwood can walk to classes, they face their own safety concerns.

For years, residents along Johnston Avenue have been requesting traffic-calming measures such as speed humps and crossing guards during the school year. After her grandson, Jamel Austin, was hit and killed by a car in Glen Hazel in July, Desheiba Wilder made it her mission to keep his friends safe. She took on the crossing guard role herself, and a network of around 10 volunteer crossing guards has formed around her.

Mr. Cole is one of those volunteers. He said people have reached out with offers of help, including some from other neighborhoods.

“It was a beautiful thing to see people recognizing the problem and wanting to be part of the solution,” he said.

Ms. Cole McKamey reported improved lighting for night visibility in the area where Jamel was hit. She thanked Christina Spearman of MMS Group, the management company for Glen Hazel RAD’s nearby apartment building, for quickly arranging repairs to its lights.

On October 20, Mayor Ed Gainey announced neighborhood safety commitments stemming from the October 5 community meeting in Glen Hazel. These include eliminating the requirement for city-employed crossing guards to have a driver’s license. The mayor’s press release mentioned that two lights on Rivermont Drive were fixed. Mayor Gainey also promised the following:

No date was given for uncompleted items on the list. During the October 5 meeting, municipal traffic engineer Mike Maloch said of the speed humps, “Weather is turning so we are not going to have any more time to install this project. When weather breaks in 2023, it will be implemented quickly.”