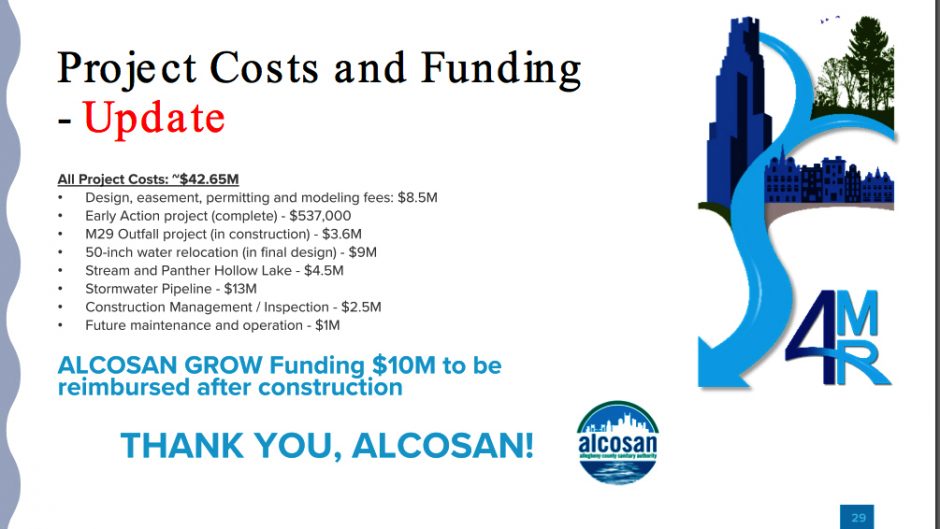 On Oct. 19, the Pittsburgh Water and Sewer Authority (PWSA) held a meeting via Zoom to update the public on its Four Mile Run Stormwater Project. The project, announced in 2017 as a way to address severe flooding in the Four Mile Run neighborhood (The Run), has come under fire from skeptics who say it is designed around the controversial Mon-Oakland Connector (MOC) plan. The MOC, announced in 2015, calls for building a road for university shuttles on the same land as the stormwater project. During the Q&A period after their presentation, PWSA officials made several false statements related to the MOC.

Asked if PWSA is providing space in its stormwater plan for the MOC, Mallory Griffin of construction firm JMT (which is involved in the PWSA project) answered no. Yet PWSA senior group manager Tony Igwe asserted that removing the MOC from the watershed plan would require PWSA to start over, which would cause significant delay and cost millions of dollars in changes.

“PWSA has always said the stormwater project will still move forward whether the trail is there or not,” Mr. Igwe explained. “But what we never said was how much additional cost and time would be required if the trail isn’t there… To suddenly shut down one piece of that project, take it off the table, and then ask us to do a project, the first thing that’s going to happen is now we have to redesign the project to take that Mon-Oakland [Connector] out of the equation.”

The public has been told repeatedly at public meetings that the watershed plan and MOC are “two separate projects.” PWSA’s own notes from its Sept. 2020 public meeting on the stormwater project state:

“We are going to do the stormwater project no matter what. If the roadway stopped being planned, we would have to amend our permit, which would result in a paperwork review for [the Pennsylvania Department of Environmental Protection (PA DEP)] and some timing changes, but we would still do our project. For the stormwater project, the money is committed, the PWSA board has approved it, the design is essentially complete, and we are moving forward with it.”

In several earlier public meetings, former stormwater project manager and current PWSA Board Chair Alex Sciulli had assured residents that the stormwater project takes precedence and that removing the MOC would not cause a significant delay because they are two separate projects.

Ms. Griffin said that the PWSA hopes to have the permit approved by this winter, but warned of consequences if the MOC is removed as residents have been requesting for years. Slide 21 of PWSA’s presentation reads, in part: “If the new City Administration changes or removes the Mon-Oakland trail design, permitting will need to start over causing significant delay.”

Outgoing mayor Bill Peduto introduced the MOC plan to advance university and foundation goals. Mayor Peduto became Pittsburgh’s first incumbent mayor to be unseated since 1933. Mayor-elect Ed Gainey, by contrast, has clearly stated that he opposes the MOC. According to his campaign website, “Ed will stop the buildout of Mon-Oakland connector and prevent the construction of other privatized or quasi-privatized mass transit systems designed to support luxury development at the expense of existing residential communities.”

Community members at the meeting reminded PWSA of this, but Mr. Igwe said, “Up until that is done officially, all we’re really dealing with is people giving us their ideas and opinions on where they stand, and until someone puts something in writing formally that says it’s from the office of the people who can make the decision, that’s where we have to assume the project is going until it’s absolutely clear that it will not.”

Run residents have suffered a total of 10 major 25- to 75-year flood events in the last 15 years. They say a 10-year flood event plan (per PWSA’s current design parameters) is dangerously inadequate and that addressing floods must be prioritized. Every flood in The Run is an illegal combined sewer overflow that contains raw sewage—not merely stormwater runoff—which independent stormwater management consultants have labeled a public health and safety crisis.

PWSA will spend $42.65 million on the stormwater project, according to their latest presentation. In a June 2020 meeting, another public presentation revealed that only about $14 million is going directly to flood relief in The Run. Asked why, PWSA acting senior manager of public affairs Rebecca Zito responded in an email on Aug. 24, 2020, “The remaining funding can go towards future projects in the upper portions of the watershed, provide opportunities to collaborate with the universities and other community organizations on future stormwater projects, or revisit some of the original green infrastructure projects planned for Panther Hollow Stream and Phipps Run.” (emphasis added)

Subsequent presentations between then and now have added items that were not previously considered part of the “core” project in the Junction Hollow section of Schenley Park. It is unclear whether the money set aside for opportunities to collaborate with the universities has been diverted to these new items, including “Construction Management / Inspection” (which presumably was always needed to complete the project).

In a letter responding to a resident’s statement at PWSA’s Oct. 22 board meeting, Mr. Igwe included the information from the budget slide and said the budget “does not contain $26 million ‘being held back for future projects.’”

The Oct. 19 presentation included photos of sidewalks in The Run that were dug up in the process of moving gas lines in advance of the stormwater project. One community member commented that the strip of rocks filling the trench down the middle of the sidewalk looked like “a tripping hazard.” A Run resident said they had been told the sidewalks would not be replaced until after the stormwater project is completed.

Ms. Griffin said the sidewalks were “100% in Peoples’ scope to replace” and pledged to “follow up with them tomorrow first thing to see what their schedule is for replacing the sidewalks.”

About two weeks after the meeting, construction crews returned to The Run. As of Nov. 12, they were putting finishing touches on the new sidewalks.

PWSA received a technical deficiency letter from PA DEP dated May 27, 2021, in response to their permit application filed for the project in August 2020. Ms. Griffin and Mr. Igwe both mischaracterized this letter during the Q&A session, stating that the deficiencies identified were unrelated to the MOC. Ms. Griffin said that in a subsequent PA DEP letter “they had no questions on the trail’s impact to the flooding.” This point is debatable, but PA DEP’s concerns in the May 27 letter regarding the MOC are not incidental. Of 35 items listed in the 8-page letter, 13 specifically mention the MOC. For example, environmental comment 26 refers to additional permit requirements associated with the MOC:

On Oct. 29, PA DEP sent PWSA a second technical deficiency letter. They identified remaining “significant technical deficiencies” and requested a meeting with PWSA to discuss and explain them. Comment 17 in this second letter asks PWSA to “confirm that the Mon-Oakland Mobility Project is the same as the DOMI trail” and clarify that the full scope of the project is shown in a drawing called the “Boundary Street Concept North of Junction Hollow.”

“If there are additional components and/or sections of the overall DOMI Trail/Mon-Oakland Mobility Project,” the comment continued, “please note that a Comprehensive Environmental Assessment may be requested.”

After the Oct. 19 meeting and before receiving word of the second letter, residents asked the PA DEP to delay their decision to approve or reject the dual permit until at least February 2022.